What golfer doesn’t dream of being a standout player, right? However, standout isn’t always a good thing if you’re standing out because of golf mistakes verses golf skills. Golfing is a complex and challenging sport that leaves one with infinite possibilities for mistakes. On the flip side, this also means infinite possibilities to play better. The term “mistake” is almost as pompous sounding as amateur and novice, but the fact remains that a lot of less seasoned golfers make a lot of easily fixable mistakes. Let’s get to work solving some of these common mistakes so that you can start standing our for the right reason.

Mistake One: Not Looking The Part 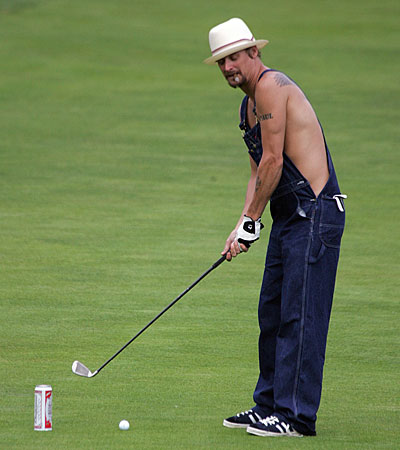 Here we go with that infinite possibilities again. There are so many ways that golfers of all calibers screw this up. It may sound silly, but you’d be surprised at how distracting a bad look can be, and it’s one of the easiest golf mistakes to fix. Here are some general do and don’t do facets to look better to play better:

• Don’t wear dark socks with khaki and light-colored golfing attire and shoes. While you may be murdering fashion, the game itself isn’t a funeral.

• Do leave the white belts to people under the age and waist size of 36.

• Do get fit for clubs so that you don’t look like you’re doing yoga to get a proper stance and swing out of a club.

• Don’t let your bag get cluttered with six pairs of hole-ridden gloves, towels growing their own biology experiment, and playbooks from last century that all go tumbling out as you’re trying to pull out equipment you actually need.

• Do wear the right size shoes, pants, shits, hats, and so forth. Cracking a good ball is fine; showing your literal crack to everyone – not so great.

• Don’t leave your clubs laying around. The longest walk isn’t from the 18th hole to the clubhouse after blowing a great lead. It’s having to backtrack multiple holes to find a forgotten club.

• Do leave your phone in your bag and on silent, not in your hand. Nothing says awkward like a Snoop Dog ringtone blasting just as someone swings.

• Don’t forget sunscreen, especially if your fair skin burning will cease a game before it’s done.

Mistake Two: Not Acting The Part

You’ve got the right look. Now, you need the right behaviors to match. Here’s some do and don’t do tips on acting the golfing part:

• Don’t explode like a four-year-old who just had his favorite LEGO set stolen by Batman. Accept a bad game as a bad game. Make a commitment to practice more often, but keep your temper and poor sportsmanship off the green. Temper tantrums are common mistakes that’ll get you asked to leave an organization and leave you without anyone willing to play with you.

• Do be safe rather than sorry. Yell “fore” whether you think that errant tee shot will hit the friendly landscape crew pruning the bushes or not. Can’t fathom your 3-wood will reach players on a green you’ve never hit in two? You better still yell fore.

• Don’t be that arrogant guy/girl who thinks all the beverage cart workers need your witty, snide sense of humor in their lives and are secretly pining for you to ask them out on a date.

• Do make the game enjoyable for all by not blaming the golf gods, whining , moaning, or crying. Take personal accountability. Don’t make the mistake of trying to force others into boosting your deflated ego by going on and on about yourself being a terrible golfer.

• Don’t give everyone a play-by-play of your last round of golfing. Unless it’s some feat that would send a shiver down Mr. Wood’s back, keep the conversation aimed at the current round.

Mistake Three: Not Playing The Part On The Simple Stuff

These are very fixable mistakes that just require you to take the time to learn the basics of the game and put them into practice. Here are some tips:

• Don’t aim at nothing. As Harvey Penick told his tournament-bound student, “take dead aim.” Check alignment and aim your clubface for every single shot.

• Do play the middle tees. Playing back at the 7,500 yard champion tees does not give you an automatic man nor pro card.

• Do watch your ball. Looking up at the sky will not hold the answers for a bad shot that bounds deep into the woods.

• Do know how to properly take a drop. Stand facing the hole with ball in-hand and your arm extended straight out. Drop it. No flips, dips, jumps, spins, or Kung Fu moves required. If the ball was out of bounds, add a stroke and hit from your last play spot.

• Don’t neglect to carry the right wedges. Fitters say to keep 5 to 6 degrees between your wedges. If your pitching wedge is 45 degrees and your sand wedge is 56 degrees, for example, you’ll clearly need a gap wedge because you have more than 5-6 degree difference.

• Do time your swing. Jim McLean uses “1 and 2” count for a perfectly timed swing, with “1” taking you to the top, “and” covering the pause and transition, and “2” taking you through the impact.

Mistake Four: Being A Time Leach

Don’t be that golfer that everyone avoids because you slow down the game to turtle speed. Some dos and don’t dos when it comes to game pace:

• Do remember a slow start isn’t necessarily an indicator of a bad round. Don’t start wasting time by over-analyzing every move. Just play.

• Despite the fact you’re 300 yards away, you’ve let either narcissism over how far you can hit the ball or poor time management cause you to wait for the green to clear on a par 5. The ball is finally shot and dribbles 100 yards along the ground. Eyes roll harder than the ball.

•Again, don’t slow the game down by forgetting that phones, constant hydration from the beverage girls just to flirt, not having the right equipment, not knowing the rules of the game, forgetting essentials like sunscreen or sunglasses, and so forth make other golfers have to wait on you.

• Dont forget to replace divots and rake bunkers. This impacts other golfers and slows their game down.

Mistake Five: Not Getting The Basics Of A Good Golf Swing Down

With a lot of moving parts and thousands of things that can and do go wrong, the swing can be the most complicated point to master. Here are some tips to improve the foundation of your swing:

• Do warm up beforehand. Stretch your muscles, tendons, and ligaments so that they’ll be flexible for your swings. Go through your entire bag, taking a couple of smooth swings with each of your clubs.

• Don’t force your swing to be too forceful. While once a game of finesse, we now see a game surrounded by distance and power. The problem is that distance, power, and accuracy are rarely congruent in an average swing. Slow down speed and force so that you can learn to accurately, cleanly, and consistently hit the ball.

• Do schedule an appointment with a club fitter. All clubs are not the same, and this creates unique swing malfunctions based on the club’s design and the person’s body measurements. A club fitter can eliminate a lot of these common swing issues and flaws.

• Don’t let poor alignment affect your swing. Toes should be parallel to the target line, not facing it. Place alignment rods or clubs on the ground to ensure you maintain your alignment until it becomes second nature.

• Do check your grip. Gripping too tightly strains and tightens muscles, resulting in a slower, less powerful, and less accurate swing. No one is going to steal your club out of your hand. So, loosen it up a little if your hand is full of bulging veins.

There you have five areas where golf mistakes are abundant in nature, but also very easy to fix and play better.

How many of these golfing mistakes are you guilty of having on the green?