Mallets often have more design characteristics than traditional blade putters and are known for their larger clubheads.  The club faces are similar between a mallet and a blade, but the clubhead on a mallet is larger and comes is a handful of shapes like a half circle, squareback or more abstract shapes.

The weighting on a mallet club head helps stabilize the putter head through the stroke and impact.

Looking for the Best Mallet Putter?

You can’t try every mallet putter. Here are the ones we feel are the best based on our research. For a full comparison table of the best mallet putters scroll to the end of this page. 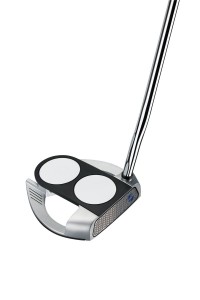 The Odyssey Works Versa mallet putter range is a collection of stable, well balanced and forgiving putters that will give you more confidence when you’re standing over the short putts, as well as getting you close to the cup on those occasions when lag putting is the order of the day.

Odyssey have always had a commitment to strong alignment and the Works Versa range is no exception, making it easier for you to line up and pull the trigger when you need to make the putts.

Clutching at straws, but the Works Versa line of putters can at times lack the feedback that other putters offer due to the consistent nature of the putter. A good strike and a poor strike are sometimes indistinguishable. 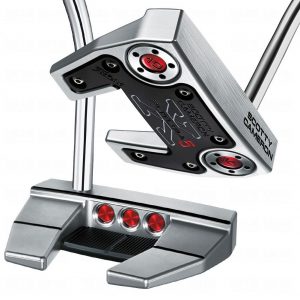 Scotty Cameron always produces great looking putters, and this is no exception. Made with Dual Balance technology the Futura X5 promotes a stable, balanced putting stroke at all times, particularly advantageous for golfers who have trouble producing a consistent putting stroke time and time again.

The putter head has been made 50 grams heavier for added stability, and is offset with a 50 gram counter balance weight in the top of the putter which makes it ideal for golfers who are transitioning from an anchored putter to a conventional one. 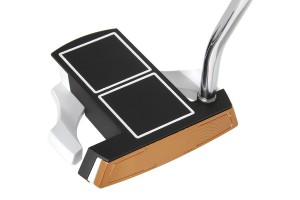 The Cleveland Smart Square TFI’s main point of difference is it’s enhanced alignment features, in particular the Dual Axis Alignment, which is the two squares on the top of the putter head that allow you to frame the line of the putter more effectively – 23% more accurately according to Cleveland.

Made up of 17 different components, the Cleveland Smart Square TFI comprises some state of the art materials such as the copper-infused aluminium face and polymer backing, ensuring that the feel of the putter is paramount.

Available in four different models, The Odyssey Works Tank Cruiser features improved forgiveness across the putter face, ensuring that even your poorly struck putts result in decent enough contact to get you close to the hole.

With built in adjustable weights in the head as well as in the butt of the grip (SuperStroke as standard), the Odyssey Works Tank Cruiser is an innovative putter that has versatility at it’s core, with the ability to evolve as your game does. 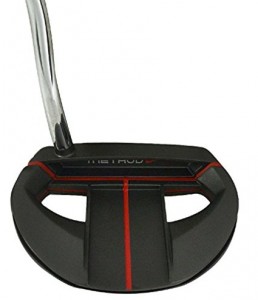 Designed with a large face and built-in stability, the Nike Method Converge putter has forgiveness at it’s core, which allows you to fall short of the perfect stroke but still make good connection with the ball and achieve a consistent roll.

Featuring a red T-shaped alignment aid on it’s head, this putter will help you line up and make more putts. 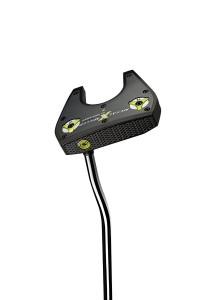 This mallet putter features milled roll technology which includes oval depressions on the face of the putter which increase friction at impact, resulting in an improvement in rolling consistency.

Another great feature of this putter is the adjustable weight system so that you can ensure that your putter is tailored to your game. 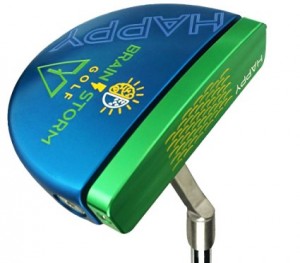 This putter is a disruptor –  a putter for the thinking-man’s golfer. Featuring revolutionary levels of customisation including adjustable loft, lie, offset and overall weighting, the Brainstorm Golf Happy Putter can be tinkered with to suit practically every single stroke type or ability.

This putter is more than a gimmick, featuring pleasing feel off the face and all round solid performance.

Let’s look at mallet putters, so named due to their croquet head-designed mallet blade.

Mallet putters have become very popular in golf over the past few decades. With a number of pro golfers using them, including Padraig Harrington, Nick Faldo, and Jim Furyk, they have now started to make their way into the hands of amateur golfers. 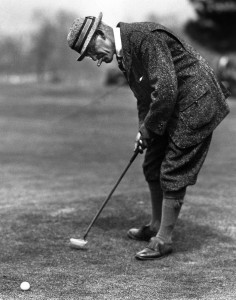 Although the popularity has risen lately, mallet putters have been around for decades. In fact, one of the first mallet styled putters was used by Walter Travis, an American golfer who won the British Amateur golf tournament in 1904. His putter the ‘Schenectady’ was very much styled in a mallet fashion. In fact, this putter, designed by inventor Arthur F. Knight, was soon banned by Royal and Ancient due to its mallet head. The ban was only lifted in 1952.

There are a number of reasons why mallet putters are popular which include the following:

Other than the advantages you would gain from using a mallet putter, perhaps one of the main reasons people appreciate this type of putter is due to its alignment aids. Because of their thicker body, mallet putters offer three-dimensional alignment opportunities unlike the one-dimension of a regular blade putter. These alignment aids are usually in the form of a few lines that help ensure you are aiming down the correct target line when setting up your putt as well as keeping the blade square at all time.

Should your golf game continue to struggle when you reach the greens, consider using a mallet putter over a more traditional blade type. Often, the extra weight, excellent balance, large sweet spot and alignment aids will help to improve your putting immeasurably.