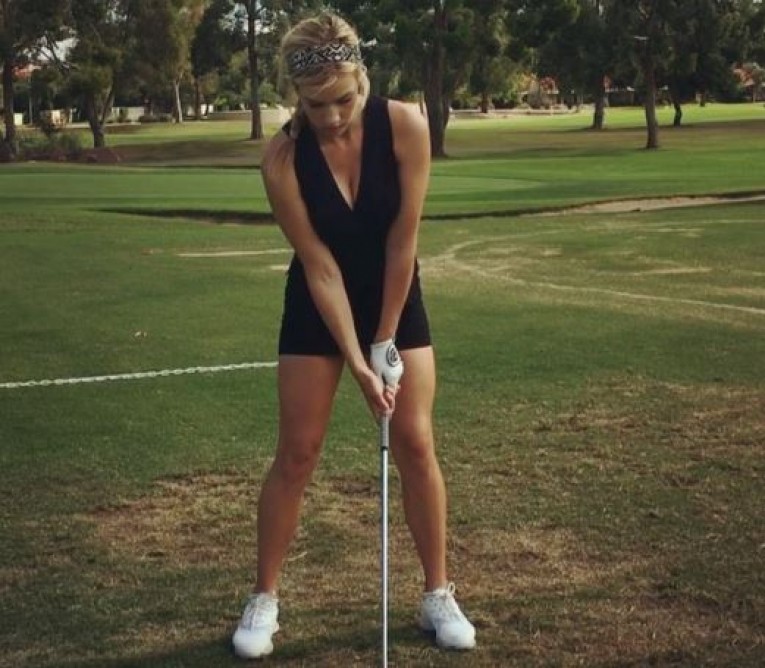 A beautiful swing is fun to look at, but a pretty lady with a great swing is even better.  Follow these hot golf babes on Instagram.

By now you’ve probably heard of Paige Spirinac aka Paige Renee, but she isn’t the only golf babe on Instagram.  Here are some of the popular golf babes on Instagram.  Be prepared to go down a time suck of a rabbit hole.

Lauren Olaya is a female golfer from the state of Texas. She competed in junior golf tours until she graduated from high school and received a biology degree from TCU. She is now co-host of Swing Clinic on Fox Sports and she continues to train as a golfer in the hopes of competing as a professional.

BTS from today’s office shooting for @forelinx. ⛳️ Thanks again to the rad crew (@hermanscheer) behind me for ? & ? along with @terranearesort.

Katrina Brodsky is a professional of many different talents. She is a model, stylist, and fashion expert, plus she is the editor and founder of Keller Rose – a website that covers fashion and lifestyle topics. In addition to that, she is also an avid golfer who has gained a following of Instagram and it’s easy to see why.

Big kids can play in the sand too. Just slipping all over the place. @golf_gods #golf #cali #middleofnowhere @golfbabes @golfballed @pingtour

From the state of Texas, you have female golfer Stephanie Smith. Her pro career started in 2012 following her time playing golf for Texas Tech. After participating in the Symetra Tour in 2014, she now splits her time between training to improve her position as a female golfer and modeling.

I don’t always post swing videos, but when I do, I’m off mats

??? Because posting the trick shots you actually pull off are boring. This is all @jennisis11 fault. Now my trick shot days are over. #fore #putaneyeout

Paige Spiranac is a female golfer out of Arizona and she has a few accomplishments in her young career. She went to San Diego State University where she was a member of their conference winning golf team and she won the Colorado State Match Play tournament in 2015.

With Casandra Blaney, you have a young female golfer from the state of New York. Along with golf, she is enthusiastic about fitness and among her accomplishments, you can count a position on the 2007 United States junior team for the Ryder Cup. Her credentials make her one of the female golfers to keep an eye on for the future.

Working on one of my favorite shots around the green! (Now the key is let’s see if I can do this 20 more times in a row…) hahaha ⛳️? #golf

Working on the “I have no option but to close the club face and believe it will turn over” shot haha ?? #golf #excusemetreeyouareinmyway

University of North Florida Student and former beauty queen Elise Lobb is becoming one of the more popular female golfers on Instagram. She does not currently play competitively, but she plans to play at the collegiate level in the future. While her future plans do not include the LPGA, she is hopeful that one day she can work for the Golf Channel.

From Surrey, England, Lucy Robson is quickly becoming one of the more popular female golfers online. In the past, she had an impressive run playing as a freshman and sophomore for South Florida. Now she is a student and member of the golf team at California Polytechnic State University.

Born in Adelaide, Australia, Anna Rawson is a professional model and accomplished female golfer. She enjoyed significant success as an Australian amateur and a collegiate golfer in the United States, plus she has experienced success as a professional, qualifying for the LPGA tour and competing in major tournaments.

fun shoot with SI Golf check it out now. http://www.golf.com/tour-and-news/round-lpga-star-natalie-gulbis via @golf_com.

Natalie Gulbis is a professional golfer from the state of California. She went to the University of Arizona on a golf scholarship but left after her freshman year to pursue a career in the LPGA. At the age of 18, she qualified to play on the 2002 LPGA tour and since then has won several events. Her first professional win came in 2007 at the Evian Masters. Follow along on her journey.

Everything looks cooler in slow motion

Born in China, Muni He moved to the United States and played high school golf in San Diego. She has competed in many of the top junior golf tournaments in the United States and she is going to USC on a golf scholarship. In 2015, Muni was one of four amateur golfers to qualify for the US Women’s Open Championship.

At this time of the year I like to think about what I’ve done & where I’ve been & who I’ve met ? I couldn’t be more grateful for all the opportunities I’ve got this year ?⛳️✈️✨ this is one of my favorite pictures. How was your year? ?

Well known on Instagram for her beauty as well as her golf game, Kasia K is a popular female golfer with a high-profile online presence. You can find much about her golf game by visiting her social media accounts where she also shares her interests in modeling and travel.

Female golfer Jordan Wolf is a total golf babe. She comes from St Louis and she’s already starting to get a lot of attention. She is currently a member of the Jacksonville University golf team and before that, she played for South Florida. As a high school golfer, she was First Team All-State and placed well in state competitions all four years.

What other golf babes on Instagram did we miss?